Semi-continuous systems are ones which have breaks between periods of continuous cover. Typically, the continuous cover would be part of a week, say 6 or 5 days, followed by a break of 1 or 2 days. However, it could be over a longer period, for example 12 days followed by a 2 day break every fortnight. Typical features include:

There are an enormous number of options for semi-continuous shift patterns and we can supply you with examples of some of the more common ones.  Each option can be described in the following way:

Flat coverage and a continuous period during each week

The following table shows the average paid weekly hours, based on the assumptions below, for each combination of weekly continuous operating hours and number of teams. Only average weekly paid hours of between 33 and 48 are listed. We can provide you with examples of shift patterns for any of these combinations. 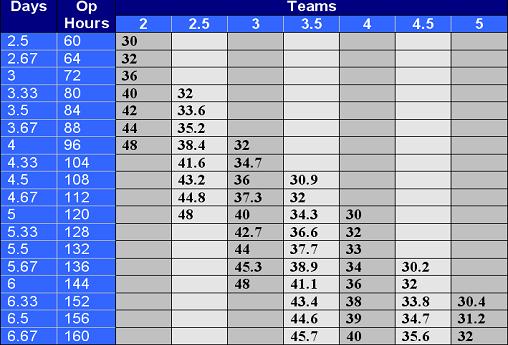 The table above includes options for 2.5, 3.5 and 4.5 teams. In these systems, each shift consists of two half-teams which means that, for example, the 2.5 team system is based on 5 half-teams. Each half-team will work with a number of other half-teams over the cycle length of the shift pattern. There are therefore issues regarding supervisory cover and skill mixes.

More than one shutdown during the week

Some systems operate continuously for a number of days but have an additional shift in the middle of the weekly shutdown thus creating two gaps over the week. For example, 4 teams operating over 5.5 days (say, Monday day to Saturday day, inclusive) with a 12-hour day shift on Sunday. This creates two gaps on Saturday and Sunday nights.

The above table for average paid weekly hours is based on the assumption that a full team is rostered on each shift. Sometimes the staffing level requirements can vary through the operating period. If this is the case, and you need some help in devising a shift pattern, then please contact us.

Flat coverage and a continuous period during each fortnight

Some organisations operate for one continuous period and have one shutdown every two weeks. The table above, showing the average paid weekly hours, can be applied to this type of operation but is based on twice the operating hours. So, for example, a 10 day or 240 hours continuous period with a 4 day shutdown every two weeks requires an average of 40 hours per week. Note that:

We can provide you with examples of shift patterns to match this type of operation.

An alternative approach to having one shift pattern that includes the rotation of all shifts is to have dedicated groups of staff on fixed shifts. This can be done in a number of ways:

Contact us if you'd like to know more about any of the services we offer such as prices of our lists of shift patterns, workshops, consultancy and RotaView, our rota administration system.